Uncontested divorce: Don’t beat your head against the wall 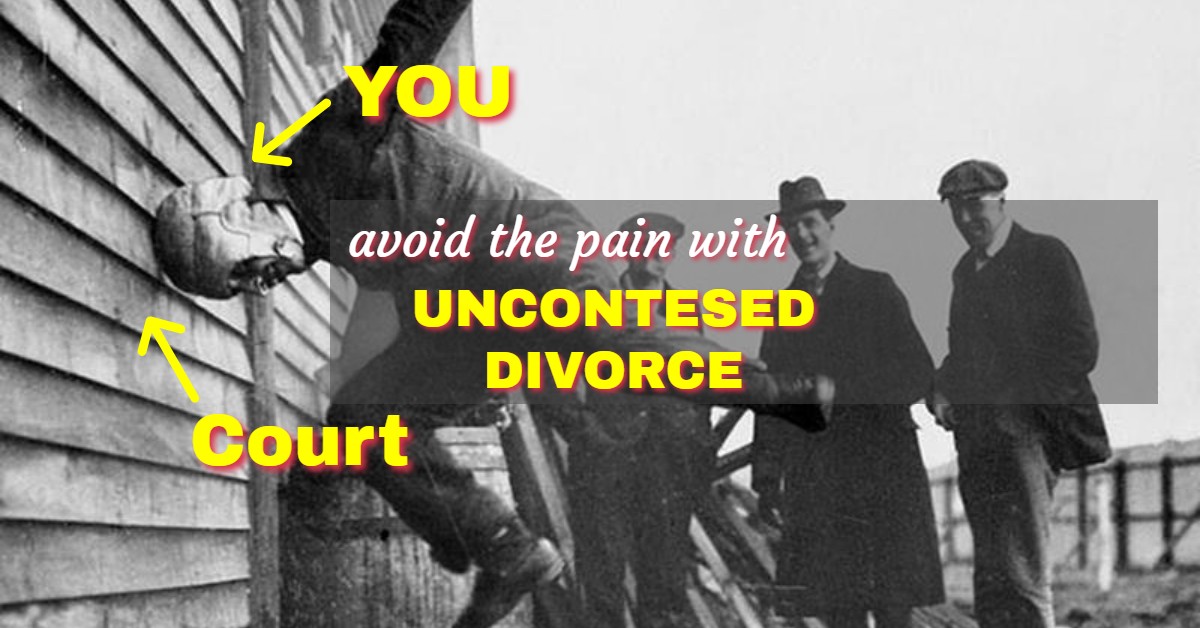 Sometimes people can avoid feeling like they are beating their head against a wall by avoiding the blow mistakes.

People think court cases, including divorces, are about what’s fair. But that’s not the case. Court cases are really about outcomes that are consistent with the law, and the law is not always fair. Furthermore, judges interpret the law, and therefore, the outcome of court cases is uncertain.

If you fight in court, you are subjecting yourself to an unpredictable outcome.

So it can make more sense to agree to a solution that you think is unfair, rather than fighting in court to get the same result.

Mistake 2: getting revenge on your spouse

But what people need to consider is the cost of revenge.

After all, who wants an economical revenge? As in many cases where people seek revenge, revenge through divorce can come back to bite the person seeking revenge.

Is that really worth it? I guess that’s all for you to decide.

Mistake 3: you can just tell your side of the story

An uncontested divorce is one by agreement. But sometimes people think they don’t want to do that because they want to tell their side of the story.

Guess what? Telling your side of the story can be harder than you think.

You might explain something to your lawyer, and everything might seem very believable. Even logical. But in court, there are certain standards. You need to prove things, you need to have evidence. There is a complicated procedure.

Therefore, people often vastly underestimate the difficulty of proving something in court.

When they find out how difficult it is to prove things in court, they realize that fighting in court doesn’t make a lot of sense.

So instead of fighting in your divorce, it might be a good idea to get an uncontested divorce in Illinois, by agreement.

That way you don’t have to worry about proving stuff.

Mistake 4: overestimating the value of assets

There are very few items that are really worth fighting about in court.

Obviously if you have a bank account or stocks, those things are worth the balance, or their market value. One can also usually determine the market value of a house fairly accurately. Maybe even cars.

But believe it or not, people often fight about stuff that isn’t actually worth very much. Certainly it’s not worth very much compared to the cost of litigating.

Suppose you have a fancy piece of furniture worth $5,000.

Guess how much it cost to fight about something super simple in a divorce. A lot more than $5,000.

And many times, people will pay their lawyers to fight about things that are worth much less than what they are paying their lawyer to fight.

When you’re reading this, you might think I’m describing a scenario that’s pretty rare. However, people fight about stupid stuff all the time.

True, I handle uncontested divorces for a flat fee. But I also am a litigator, and have plenty of experience fighting in court in cases that cost tens of thousands of dollars and take in excess of one year. I can tell you that it’s very common for people to engage in non-economical litigation.

Believe it or not, divorce lawyers often tell people what they are fighting for is not worth it. In essence, divorce lawyers tell their own clients how to pay them less. But often, the clients want to fight anyway.

You can avoid all that nonsense if you get an uncontested divorce in Illinois.

Mistake 5: making a mountain out of parenting molehill

People often imagine a bunch of ridiculous stuff when it comes to kids.

Very often, people act like it’s a disaster for the other parent to get just a little bit more time with the kids. Really?

They weighs thousands of dollars and put their kids through a bunch of ridiculous nonsense in court. Most often, fighting about kids is because one person is actually a bad parent, and it’s usually the parent trying to reduce the other parent’s time.

Here’s some news for you. Courts will give generous parenting time to people even when one of the parties is not the best parent in the world. Parenting isn’t about being perfect, and courts recognize that.

So before you cause a big fight it cost yourself a lot of money trying to reduce the other parents time with the kids, you should really consider whether it’s worth it. Besides, you might spend a lot of money fighting and end up with a result you don’t want anyway.

With an uncontested divorce in Illinois, you can avoid all that.