FAQ – Divorce Mediation with or without lawyers? 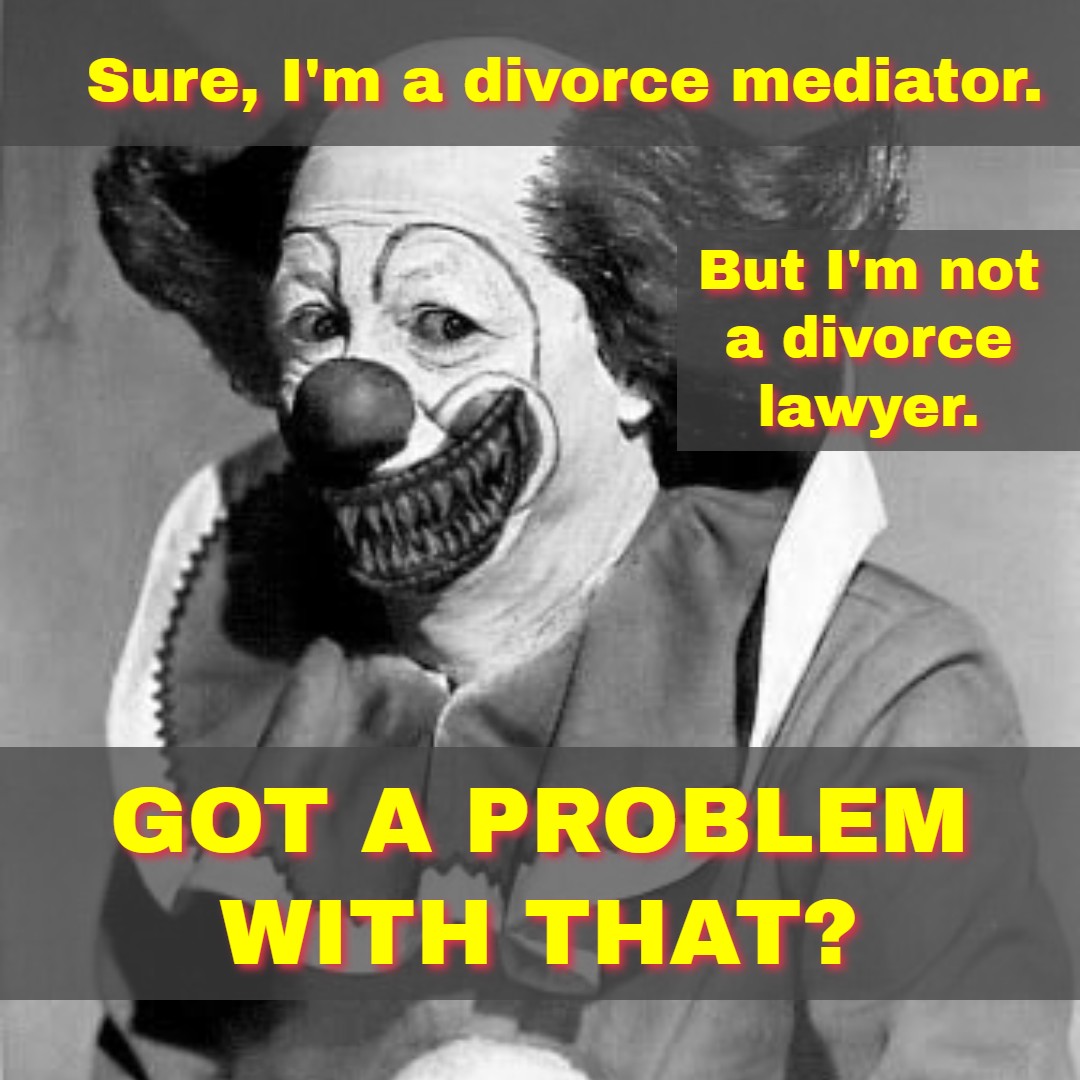 Lately I’ve noticed many divorce mediators who seem to be masquerading as lawyers in Illinois. Sure, they don’t literally claim to be lawyers. And they claim they are not giving legal advice. But there is as very thin line that separates illegally practicing law without a license and what many mediators are doing.

Are you looking for an divorce mediator? Great – you found one! I’m even part of a website devoted to divorce mediation in Illinois [link]. And I’m a lawyer. But you don’t have me to mediate your divorce. But please, if you want to mediator your divorce, choose a mediator who is also a divorce lawyer in Illinois.

I wrote this article to help people understand what’s going on with non-lawyer mediators.

What is a divorce mediator?

A divorce mediator is, simply put, a neutral third party who helps people reach agreement in their divorce. Mediators do not take sides.

Mediators in Illinois need not be licensed. In Illinois, there is as nearly useless law called the Uniform Mediation Act (710 ILCS 35/2). I’m not quite sure why this law exists. Mediators aren’t really held to any standards. And why would they be?

The Uniform Mediation Act defines a mediator as “an individual who conducts a mediation.” Hey, that’s pretty funny. Would you consider anyone who cracks a head open to be a brain surgeon? I think not.

Long story short, mediators need not be licensed in Illinois. Therefore, any loser can claim to be a divorce mediator with absolutely no knowledge of Illinois divorce law.

Yes, many lawyers are also divorce mediators. I am a divorce mediator available to mediate divorce in the Illinois counties of Cook, DuPage, Kane, Kendall, Lake, McHenry, and Will. I know many other very skilled lawyers who are also mediators.

Lawyers make great mediators because they understand the law, and what can happen in court. Understanding of Illinois divorce law and what happens in court is crucial to helping people craft effective agreements.

So if you want to mediate your divorce, it certainly makes sense to use a divorce lawyer.

Do non-lawyer mediators know the law?

All you have to do is Google a couple websites run by non-lawyer mediators, and you will quickly see that many claim to know something about the law. However, non-attorney mediators don’t know half of the law that your average divorce lawyer knows. While mediators don’t give legal advice, they should accurately inform their clients regarding the law and the legal impact of their agreements.

I’ve seen multiple so-called “mediation agreements” drafted by non-lawyers, and they were garbage.

Do non-lawyer mediators have malpractice insurance?

Some may, but not many. In contrast, it is extremely rare for lawyers not to have malpractice insurance.

Why are non-lawyers allowed to mediate a divorce in Illinois?

I have no idea. Aside from the mediators that work for the various county agencies and focus on child-related issues, it should be illegal for non-lawyer mediators to mediate a divorce. They simply don’t know enough about the law or how courts operate help people reach an agreement.

What qualifications do non-lawyers need to have to be mediators?

The qualifications, as far as I can tell, seem to be the following:

Don’t get me wrong. There’s nothing wrong with a desire to make money. Unfortunately, we all need to pay the bills. But the problem with non-lawyers in divorce mediation is that they lack proper qualifications, cannot be held to any standard, simply what to squeeze money out of divorcing couples who they draw into their traps.

If I hire a non-lawyer to mediate my divorce, do I still need a lawyer?

I think you know what I’m going to say to this. The answer: Yes.

Ironically, if you use a non-lawyer mediator in your divorce it is quit possible that you will need a lawyer more than someone who did not mediate. That’s because non-lawyer mediators often distribute inaccurate information about the law and how courts operate. That misinformation causes people to make poor decisions.

As hard as it is to believe, there are some ignorant mediators out there who actually claim that they replace lawyers. How is that? They lack a full understanding of the law!

The simple fact that some non-lawyer mediators think they replace lawyers illustrates the scam-like nature of many mediators.

Anyone who goes to mediation for a divorce should have any resulting agreement reviewed by a lawyer.

You can call or text 312-554-5433 to talk to an Illinois divorce lawyer. We handle cases in the Illinois counties of Cook, DuPage, Lake, and McHenry. This website is attorney advertising and does not create an attorney-client relationship; if you need legal advice, retain an attorney. The Wolkowitz Law Office, 10024 Skokie Blvd, Suite 236, Skokie, IL 60077.